Floor of stock exchange turning into a ghost town 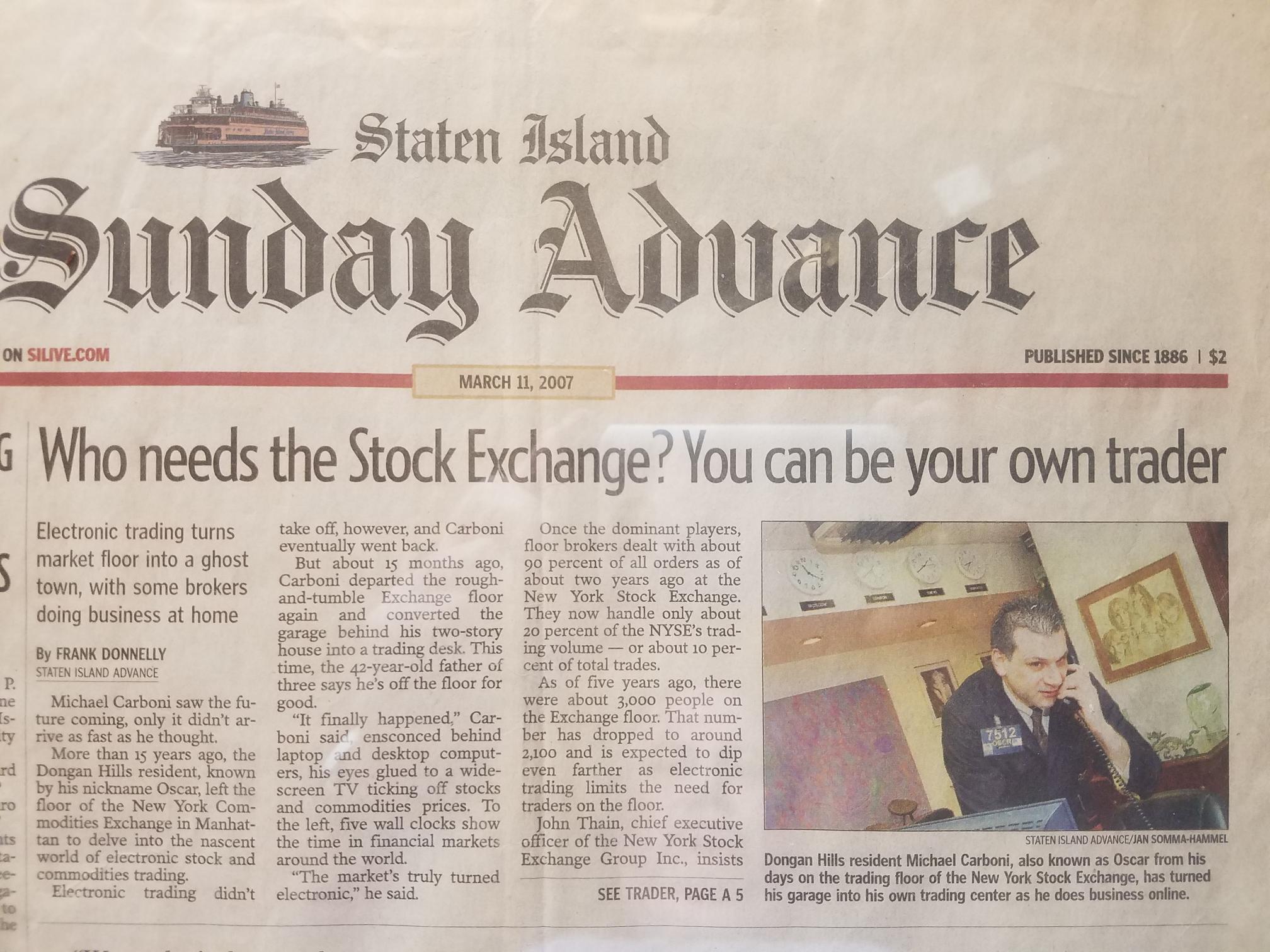 Electronic trading limits the need for traders on the market floor, with some brokers now doing business at home

STATEN ISLAND, N.Y. – Michael Carboni saw the future coming, only it didn't arrive as fast as he thought. More than 15 years ago, the Dongan Hills resident, known by his nickname Oscar, left the floor of the New York Commodities Exchange in Manhattan to delve into the nascent world of electronic stock and commodities trading. Electronic trading didn't take off, however, and Carboni eventually went back.

But about 15 months ago, Carboni departed the rough-and-tumble Exchange floor again and converted the garage behind his two-story house into a trading desk. This time, the 42-year-old father of three says he's off the floor for good.

"It finally happened," Carboni said, ensconced behind laptop and desktop computers, his eyes glued to a wide-screen TV ticking off stocks and commodities prices. To the left, five wall clocks show the time in financial markets around the world.

Once the dominant players, floor brokers dealt with about 90 percent of all orders as of about two years ago at the New York Stock Exchange. They now handle only about 20 percent of the NYSE's trading volume – or about 10 percent of total trades.

As of five years ago, there were about 3,000 people on the Exchange floor. That number has dropped to around 2,100 and is expected to dip even farther as electronic trading limits the need for traders on the floor. John Thain, chief executive officer of the New York Stock Exchange Group Inc., insists there will always be a trading floor, with the Exchange's hybrid market that marries the quick-as-lightning speed of electronic trading with a broker's savvy and experience.

"I continue to believe the specialists add value," he said, according to a transcript of a conference in December provided by the NYSE Group. "They really do make most stock trades better. And I think they're important to the quality of our market, because they really do make stocks trade in a less volatile way."

At that conference, Thain said the Exchange was in good health.

Total trading volume was up about 12 percent from the prior year. About 1.9 billion shares were being handled daily, compared to 1.7 billion shares traded each day the year before. And the average trade was being completed in just fractions of a second.

Even so, Carboni thinks he's one of the lucky ones. "There's no question as to if the end is coming. It's a matter of when," he says of working on the Exchange floor. With the ability to trade around the clock from his computer, Carboni invested thousands into fixing up his garage and reinventing himself.

He's no longer just another face on the floor, but the star of his own daily YouTube production, Short-Term Trading Live With Oscar.

Garbed in his black trader's coat with yellow piping under the arms, Carboni fronts a white greaseboard crammed with figures and commodities listings.

High on volume and energy, he rattles off market commentaries, clapping his hands or cupping his face with his hands to emphasize a point.

The idea is to reduce trading to its simplest level, so even a novice can follow.

"Now, you're literally sitting in your living room with no one to help you," said Carboni. "If you're not a professional trader, it's intimidating."

And that living room can be anywhere in the country.

In fact, Carboni, a former College of Staten Island student, plans to move to Las Vegas, where he would continue trading and try to build up his consulting business.

Yet he admits he sometimes misses the hustle and bustle and camaraderie of the trading floor.

"Being so close, you can feel when the market's going to move," he said.